This author has not yet filled in any details.
So far KRCEEAdmin has created 34 blog entries. 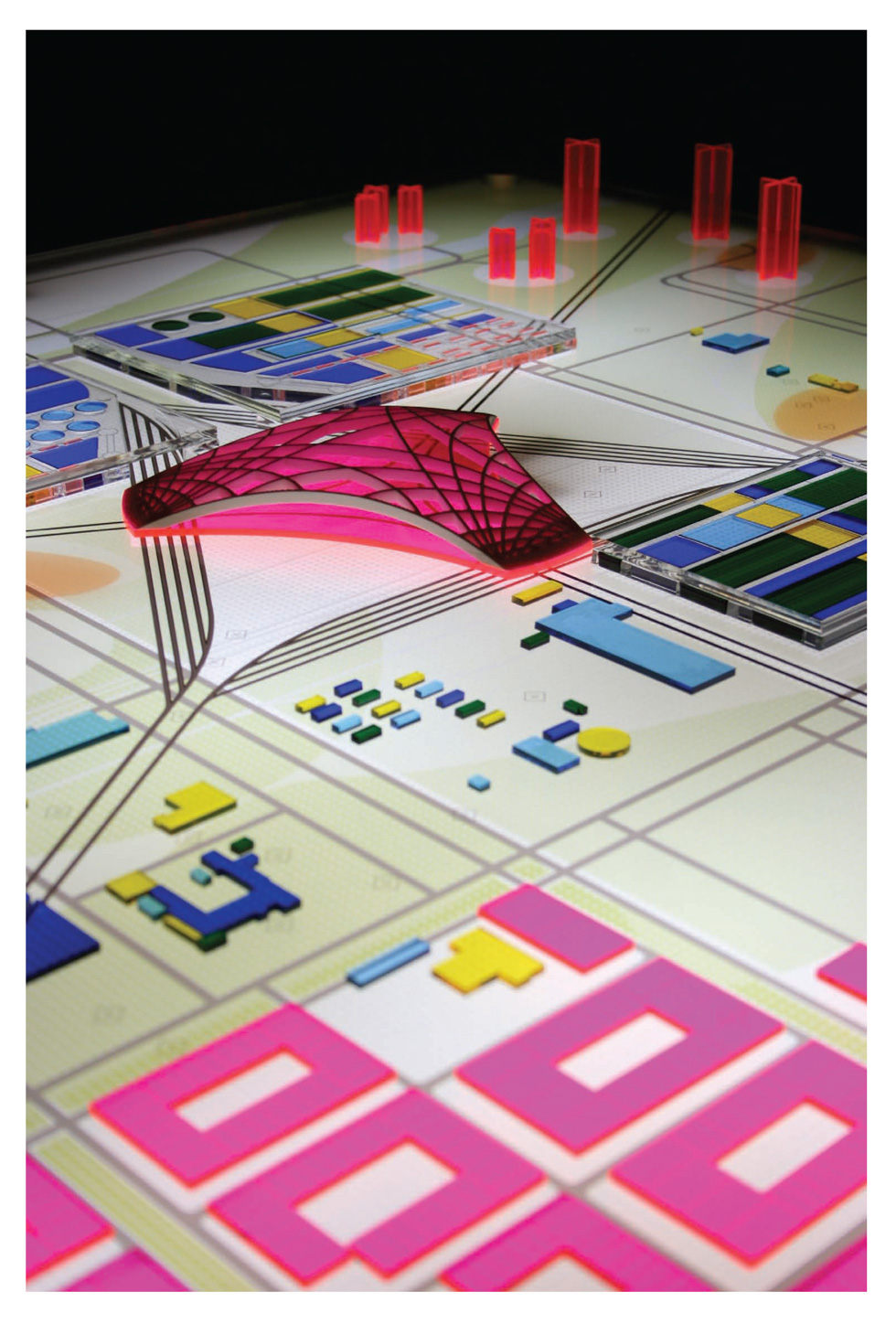 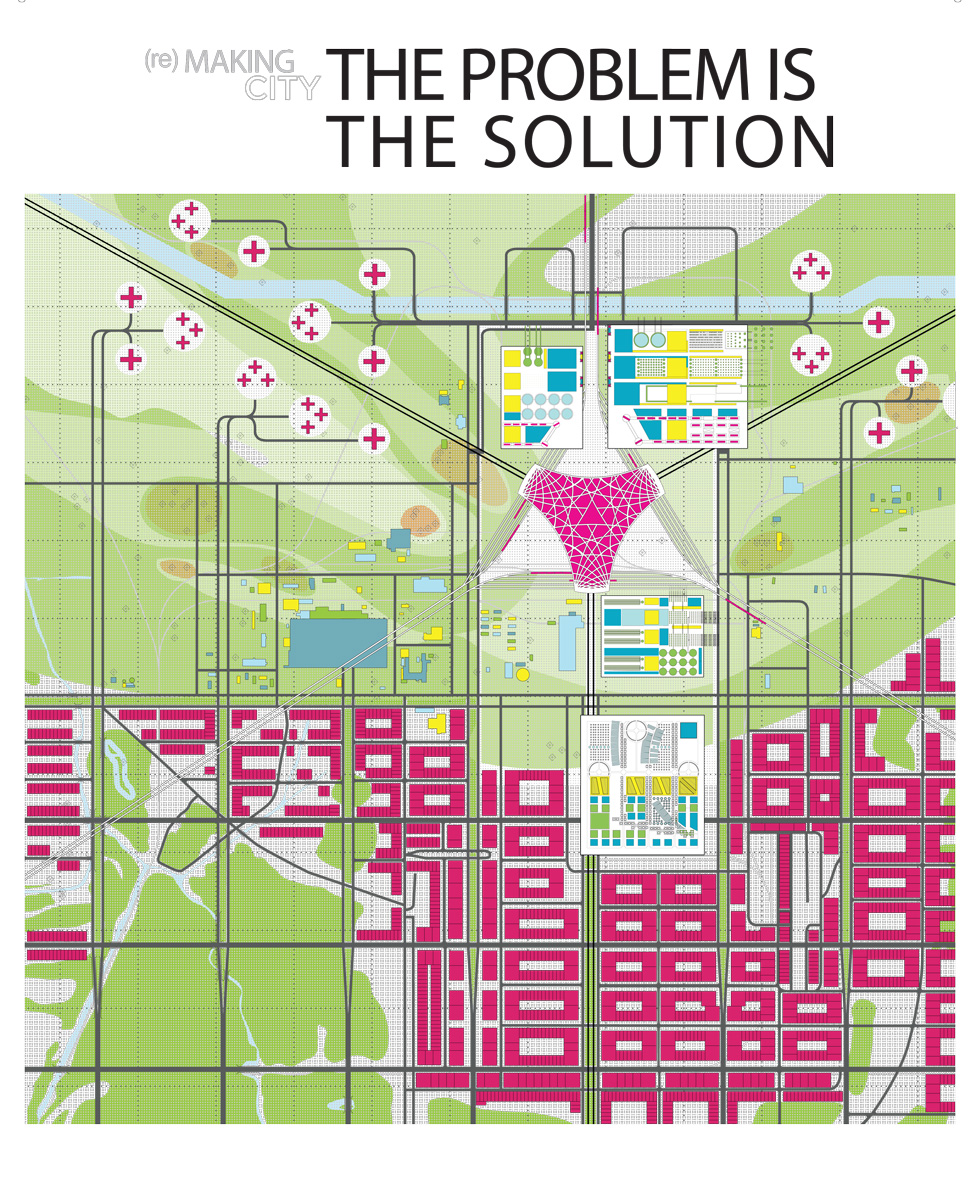 Paradoxically, one of the more difficult considerations this team faced was what to do with the four massive buildings at the Paducah Gaseous Diffusion Plant (PGDP), which at the time of construction, were among the largest on the planet.

One would think that a team of architecture students would know precisely what should be done with the buildings, but our hesitation was two-fold. First, there is the issue of whether their historical use has left them too contaminated to even consider for future uses, and next, if we were to push for their reuse, there would be the necessity for whatever we were proposing to be as extraordinary as the structures are themselves. In short, what we propose would need to live up to this challenge.

It did not take long to make the decision to keep the buildings in our proposal. Polemically, they need to stay. If we are to claim the audacity of the original Manhattan Project scientists then we needed to believe that anything is possible. When it came time to propose what might occupy the buildings and the site, rather than proposing something spectacular of similar scale – like an amusement park – we instead chose to focus on something much more audacious. We wanted to find a way in which the site could fulfill the original brief: to continue operation as an economic generator for the city of Paducah and for the region at large for the foreseeable future.

Taking the lessons we’ve learned regarding the necessary networking and constructive interconnections of Energy, Economy, Education and Environment (the four E’s), we sought to propose a dynamically equilibrated future scenario for the site that would hopefully lead to future growth. Ultimately, the proposal for the site also became a description of the interrelationships proposed between the four “E’s” in our healthy communities hypothesis.

To successfully clean up the plume, we need a commitment to research and education that would provide the knowledge base to make it happen. The outcome of that research would generate an industry of remediation technologies at the nexus of biotechnology and robotics that would occur on the site. To attract and power this industry, we would need access to safe, clean energy that we propose would be the focus of yet another research and education facility, also on utilize the (at some estimates) two-century supply of nuclear site. This effort would work to find the cleanest, safest way to energy already present. We propose (with borrowed courage from our Manhattan Project inspiration) that this happen at the PGDP.

Ultimately, the intellectual capital generated through the successful research, development and remediation industry generated at PGDP can become an exportable commodity. We imagine this to transform the region into the attractor that it could be – perhaps even resurrecting Paducah’s rail past – and becoming the nexus of an American maglev rail line.

Paducah is in an advantageous position to serve as a model of industry growth and environmental remediation in the next century. In this way, the Atomic Cities Research Group believes that the problem could ultimately be the solution.

(re) Making City, THE PROBLEM IS THE SOLUTION 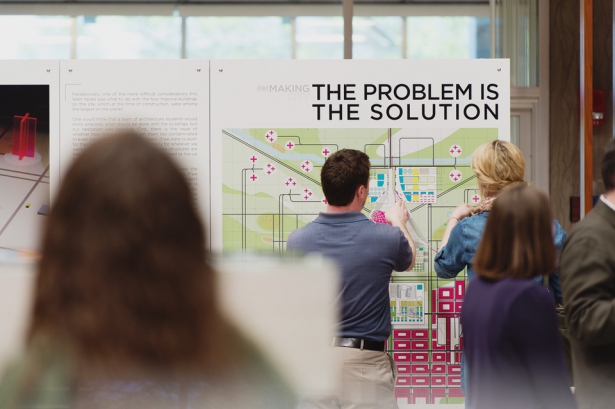 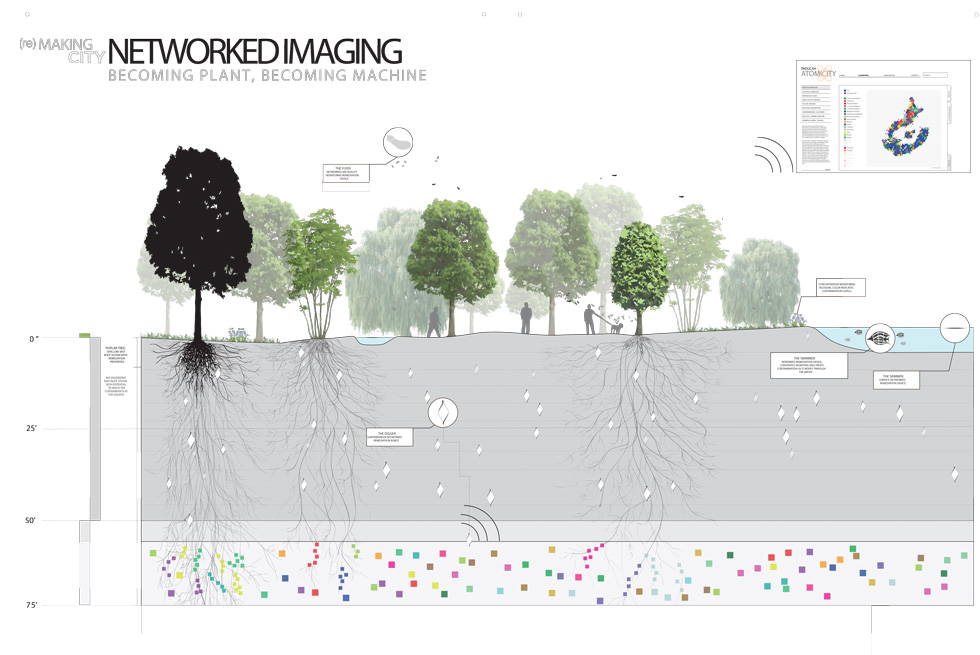 One of the first things that the Atomic Cities Research Group was asked to do was to provide a 1:350 physical model of ground concentrations present under the Paducah Gaseous Diffusion Plant (PGDP).  We were amazed to find that scientists typically understand the ground concentrations primarily as sets of numbers and points. As designers we would first seek to define the slowly moving shape, formed by underground features, dynamic attributes, and the chemical make-up of the substances themselves.

Because of this, we began to take our imaging role very seriously. After our first pass at the ‘plume model’, we began to think of other ways to simply communicate the issues at hand.

As part of a comprehensive ‘Radical Remediation’ proposal, the Atomic Cities Research Group developed a ‘plume’ dashboard to be used by both scientists and citizens (Figure 1). The proposed dashboard would show every plume presently recorded, each with location and kinds of contaminants, with or without surrounding geographic information. Residents of any community, with contaminants or without, could log in to follow remediation efforts, plume movements, and successful cleanup strategies.

Information on this dashboard would be gathered by swarms of networked passive, sensing, 3d printed remediating devices or ‘robots.’ For these robots, rather than the typical sources, we took inspiration from sugar maple ‘propellers’, floating sticks and acorns – because nature has already designed these things to distribute themselves(Figure 2). Composed of variable rate degradation waxes, starches and other materials, these robots would be designed to decompose in a way that delivers remediating chemicals where they need to be over extended periods of time.

In addition to the dashboard and the robots, the Atomic Cities Research Group also proposed a series of hybrid species of plants that could be put into service to help remediate. Did you know that Poplar trees have natural properties that can help to degrade artificial chemical spills? The only problem is that these trees typically have shallow root systems that would not reach the depth of the contaminants in Paducah. The Group proposes grafting the Poplar tree with a plant that has a deep root system in order to create a new species for the job. 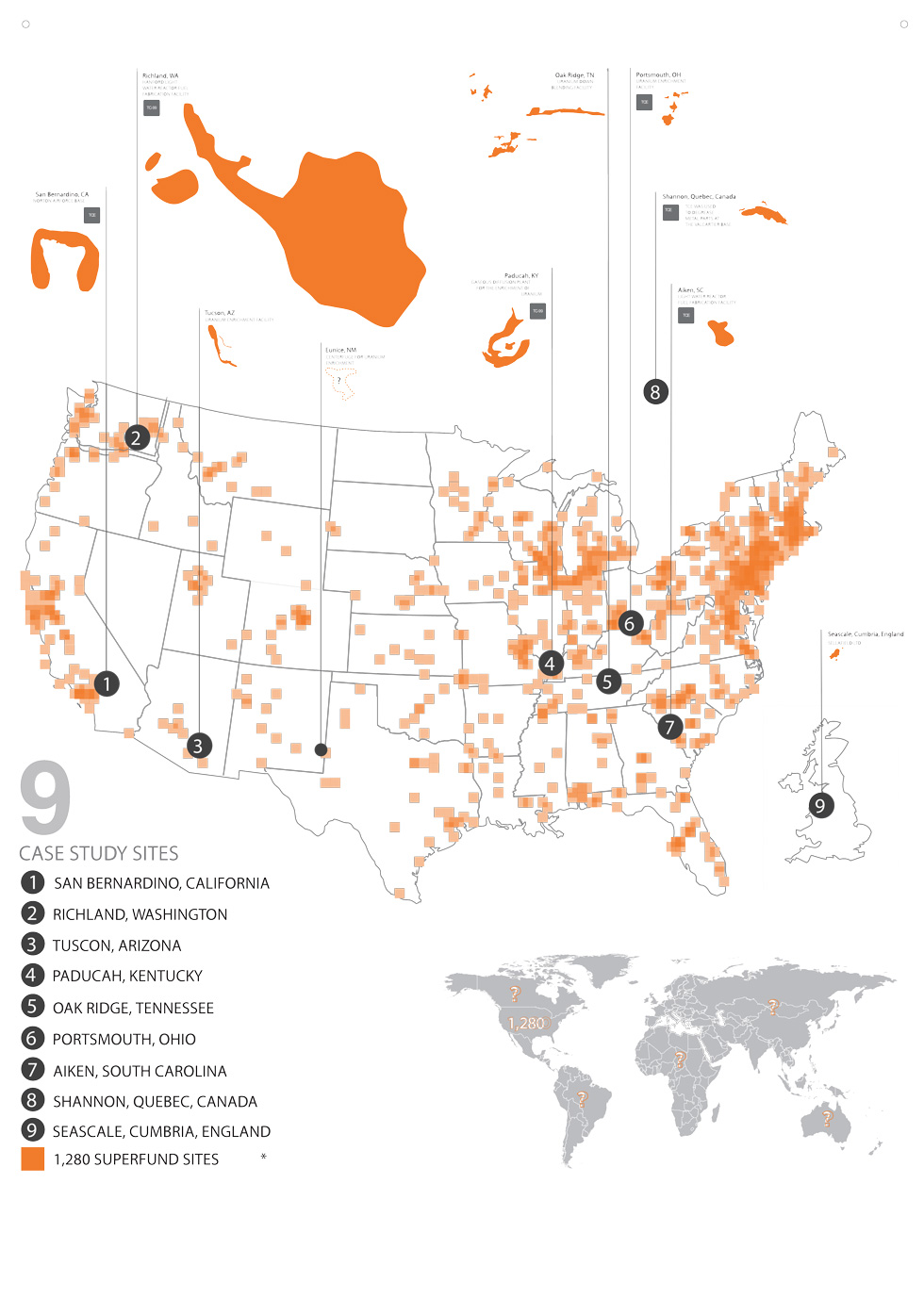 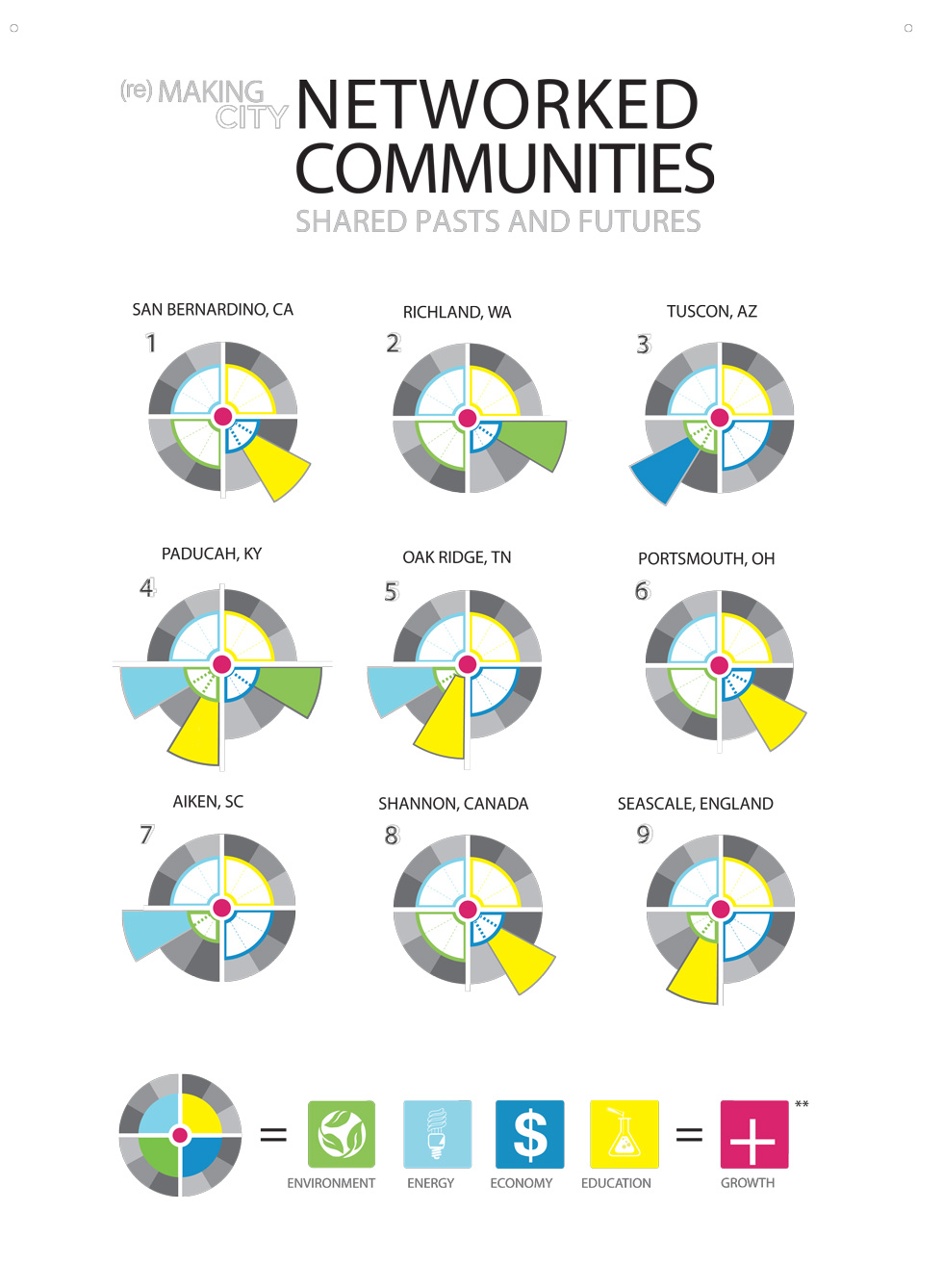 During the Cold War, over 1200 communities across the U.S. were implicitly tied together in a network of defense related industries and efforts. Initially, each location benefitted from massive public investment, affording a high quality of life and education to their citizens. Today, many of these communities are struggling both environmentally and economically.

At the time, little was known about the consequences of these processes on the environment. Today, as plants close down and environmental damage is assessed, jobs are disappearing and cleanup estimates are skyrocketing. Many of these communities are becoming overwhelmed by the question of how to handle this situation.

By evaluating several of these communities across the country and the world, the Atomic Cities Research Group made the observation that Energy, Economy, Education and Environment are inextricably related. Further, the health and wealth of any community can be diagnosed through the success of numbers and kinds of interrelations between and among these attributes at any time. To prove this hypothesis, the group needed to learn how these elements act in different scenarios.

The team ran exhaustive comparisons of nine Atomic Cities involving almost 100 different criteria. Seven of the sites are in the United States, but Shannon, Quebec, Canada and Seascale, England were also considered very closely. By understanding how various cities handle cleanup, employment, stress and health issues, education, public participation and other factors, the Atomic Cities Research Group is starting to understand how deeply interconnected Energy, Economy, Education and Environment really are. The Atomic Cities Research Group believes that “Atomic” communities can learn from one another.

It is from this analysis that the team draws its greatest optimism. When clean Energy, thriving Economy, Educated populace and a healthy Environment are poised in precise dynamic equilibrium, the Atomic Cities Research Group believes that growth will follow.